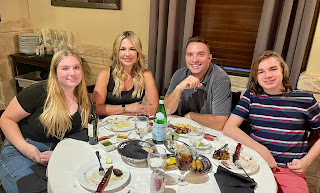 The final piece of the puzzle came into place when I met my future stepchildren. It was then and there that solidified what I had suspected when I first met Michael - he was my one.
You see, I have a confession: When I dated others in the past, I never felt comfortable with their kids. Ever. It was always a struggle. I didn’t like the way they were raised or I thought that they were bratty and spoiled. Or, their mom was a constant turd in our lives. The relationships never worked out, no matter how hard we tried. They were never right.
Spending time with Michael, Ali and Caleb felt like family. It was like we had been together our entire lives. Instant comfortable. Love. The way it was supposed to be. Something that I had dreamt of feeling, but never had the pleasure to experience. Until we found each other.
Even Mike’s ex-wife is awesome. We joke around and tell each other that we could not have asked for better “sister-wives” than each other. Instead of having s strained or drama-filled relationship, we communicate, have respect and even have birthdays and holidays together. Why not? This is the way is should be.
Although I have only known them for almost 2 years, I feel like I have been involved in their lives from the beginning. It is that comfortable. I love them like I have known them forever. Just like I do Michael.
So why am I telling you this? Because, my friends, I know that there are many of you in relationships where it is strained because of your partner’s kids (or maybe because of your own). That should be a red flag...a definite cause for pause. Can you imagine spending the rest of your life with drama in it? Man, that would be exhausting. Been there, done that.
When you are with someone with children, you need to love them like they are your own. If you know in your heart that this will never happen, what are you doing?
Thank you so much for reading today. I hope that I made you smile and think a little bit. To reach me, visit SALending.com