Shuffle Your Feet, Dang It! - A Lesson About Stingrays

About a month and a half ago, I got stabbed by a stingray while down in Port Aransas.
I was just entering the water, about to go float on a boogie board. Minding my own business, not worrying about a thing, I slowly walked out into the water. I was about 40 feet in when I felt it stab me.
It felt like a freakin’ shark bit me (or how I imagined it to feel cause I really don’t know). A quick and swift “whack” that immediately started hurting. At first, I didn’t know what happened to me. I knew that I was hurt, but I had no idea what the heck happened. I was kind of in shock. It was a deep pain...one of those that jolt you and then take a few seconds to really sink in.
I yelled out to Michael who was about 15 feet ahead of me that we needed to head back to the shore. He gave me some shit in the beginning because he thought that I was joking.
Within 30 seconds, the stabbing, shooting pains started to sink in. I can’t even describe it to you. I have a very high tolerance to pain and can withstand a lot of things, but I will tell you that the pain this caused was probably one of my top 4 hurts of all time.
We walked to shore as my foot throbbed in excruciating pain as each second slowly went by. When we got closer to the shore, I could see the blood coming from my ankle. A LOT of blood.
When we got out of the water, my ankle was spewing blood. I am talking like horror movie blood spews. It was shooting out about 3 feet to my side with each agonizing step I took. It would not stop bleeding and the pain actually got worse.
We finally got to the area where we had our stuff set up and the pain GOT EVEN WORSE SOMEHOW. OMG.
I thought about ways to chop off my foot. THAT is how bad it was.
Who the heck gets stabbed by a stingray on the shore of Port Aransas? Me. 3 minutes in the water and I got stabbed. LOL I never knew that could even happen. I thought those things were much further out into the water. Wrong.
When the life guards finally got there with some hot pads (that makes the pain stop - well, lessen) they confirmed it was a stingray and said, “You should always shuffle your feet when you enter the water.” I wanted to strangle her, but my leg hurt too bad. The venom was traveling up my leg. How nice. 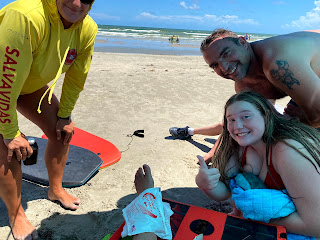 How the hell is a girl from Buffalo supposed to know that? Shuffle your feet? They need to put signs up or something. Geesh!
They then instructed me to go back to the condo and put my foot in hot water because that works to dissipate the venom and stop it from hurting. They then told me to expect “excruciating pain that will travel up my leg even further” for the next 48 hours. That gave me something to look so forward to.
Can I chop my foot off now? It was so so bad. You have no idea.
My foot stopped bleeding and I attempted to walk to the truck so we could go back to the condo. Big mistake. Blood spewed everywhere again. It went all over everyone. I could not help but laugh. I am laughing now as I write this because the memory is so vivid.
I could not put any weight on it...that sucker bled and bled like crazy. Crime scene crazy. Michael had to carry me to the truck and then had to carry me up 2 stories of stairs and then into the bathroom. We were laughing the entire time. I was delirious. 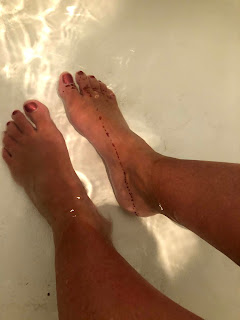 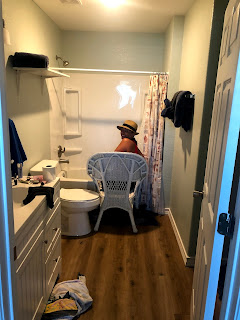 Thankfully, the hot water made everything hurt way less. Michael gave me a glass of wine and I sat there for about 2 hours until I could tolerate being out of the water. We laughed and made funny videos of our account of my experience. We were quite entertaining.
I had to go back and lie in bed for the rest of the night. I couldn’t get up or do anything because I would spew blood everywhere (cause I tried to get up and miserably failed!!).
The next day we drove back and I had to get a tetanus shot, some x rays and they glued my boo boo back together. 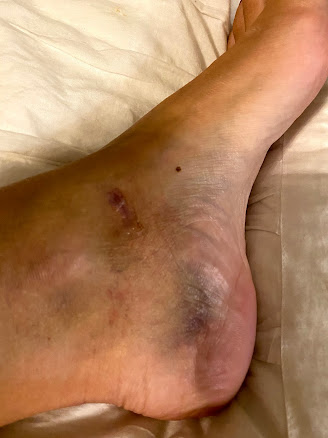 It hurt for roughly a month, but thankfully I have had no further problems like I have read about that others had.
I will have a scar and a good story to tell. Even one month and a half later, it is not fully healed. 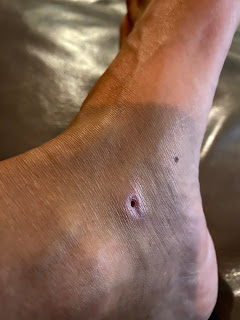 So my lesson to you is this: SHUFFLE YOUR FEET WHEN IN THE WATER.
I sure wish I would have known. Trust me, you don’t want to find out the hard way what a stingray stab feels like!
Jen
Thank you so much for reading today. I hope that I made you smile and think a little bit. Be sure to check out my Podcast on iTunes, Soundcloud and Stitcher ---- Jen’s 10 G’s