There’s a parable in the Bible that came to my mind this morning. I am sure that most of you have heard about it and perhaps read it a time or two.
It is in Matthew and it reads:

The Parable of the Bags of Gold

14 “Again, it will be like a man going on a journey, who called his servants and entrusted his wealth to them. 15 To one he gave five bags of gold, to another two bags, and to another one bag,[a] each according to his ability. Then he went on his journey. 16 The man who had received five bags of gold went at once and put his money to work and gained five bags more. 17 So also, the one with two bags of gold gained two more. 18 But the man who had received one bag went off, dug a hole in the ground and hid his master’s money.

19 “After a long time the master of those servants returned and settled accounts with them. 20 The man who had received five bags of gold brought the other five. ‘Master,’ he said, ‘you entrusted me with five bags of gold. See, I have gained five more.’

21 “His master replied, ‘Well done, good and faithful servant! You have been faithful with a few things; I will put you in charge of many things. Come and share your master’s happiness!’

23 “His master replied, ‘Well done, good and faithful servant! You have been faithful with a few things; I will put you in charge of many things. Come and share your master’s happiness!’

26 “His master replied, ‘You wicked, lazy servant! So you knew that I harvest where I have not sown and gather where I have not scattered seed? 27 Well then, you should have put my money on deposit with the bankers, so that when I returned I would have received it back with interest.

28 “‘So take the bag of gold from him and give it to the one who has ten bags. 29 For whoever has will be given more, and they will have an abundance. Whoever does not have, even what they have will be taken from them. 30 And throw that worthless servant outside, into the darkness, where there will be weeping and gnashing of teeth.’

The third dude totally played it safe. He had been given an ability and he did nothing with it. He was too scared to take the chance. He buried it until its potential shriveled up and died.
Another way to interpret that story is this: There are those that have the ability to DO and do nothing because they are scared to take the chance and there are those that DO. The risk takers. Those who are not afraid to use their God-given “talents” the way that He intended them to be used. They know that they have been given a chance to make a difference...to teach...to inspire...to learn...to lead and they actually use their gifts to make it happen. They live the life that they were intended and designed to.
Those who are brave enough, use their abilities and are given many chances to do so. God likes when we use our talents. The more we use them, the more we will have further opportunities to let them shine.
The opposite is also true.
We pray for change and when given the privilege to participate, we squander the chance because it is easier to “play it safe” and just bury things...because we are lazy or scared. Then we wonder and begin to live a life of “what if’s.”
What IF, I would have taken that chance? What IF I would have written that book? Talked to that person? Opened my heart to that change? What IF I used my ability to sing...write...play?
Today you have a choice to make: Do you use your gifts or do you stow them away? Do you live the life that God destined you to have or do you live your live un-lived because you didn’t believe in yourself?
We ALL do this. We doubt ourselves and we certainly don’t give ourselves enough credit. We don’t spend time on US long enough to grow the skills we were born with. We compare ourselves to others. Oh I can’t sing like so and so, so I just won’t sing at all. I can’t write like James Patterson, so what’s the use? I can’t lead like the President, so I just won’t lead. We tell ourselves these stupid things in our heads.
When we say it out loud, we realize how silly it is to compare our gifts with anyone else’s. So what if you aren’t like the others? You are YOU and there is a reason for that. We aren’t meant to be like anyone else.
For about a year, I have been doing this very same thing. I have the ability to write a book or a devotional. In the beginning, I didn’t want to believe it myself. Now, I wholeheartedly agree that this is something that God has intended for me to do and He has given me ample opportunity to do so.
We can all agree that I have certainly had enough of life experiences to fill a few books. LOL. I have so many lessons to share and words in my mind that can inspire others. Oh but Jennifer, you are a loan officer...you aren’t a writer. I have told myself this line about a thousand times. I have been afraid to take that chance. Do SOMETHING with my talent. What if I fail? Holy crap, that would be so embarrassing. What if everyone hates it? What if it is horrible?
It is funny how God works. He makes me laugh sometimes.
Through my most recent suffering, I have had a LOT of time off of work. More than I have ever had had in 25 years. He has given me some of the best insights and ideas that I have EVER had...and I have written them all down (in this blog, yo). He also had several people call me...the most random people...customers, friends, acquaintances who I had not spoken to in a while...to tell me that God told them to tell me that I am supposed to write. I am supposed to share my stories and testimonies with others. I have a gift, so please don’t waste it.
And so my journey has begun. I have started to compile my devotional and it will be for those who are going through hardship...be it from a loss of a job, an illness, loss of a loved one, feeling lost, sad, trauma...any life change. It will be a book about what to do the day after your life changes...how to manage, cope and thrive.
So I ask for your prayers in my journey. If I can help just ONE person, then my talents won’t be wasted.
Jen 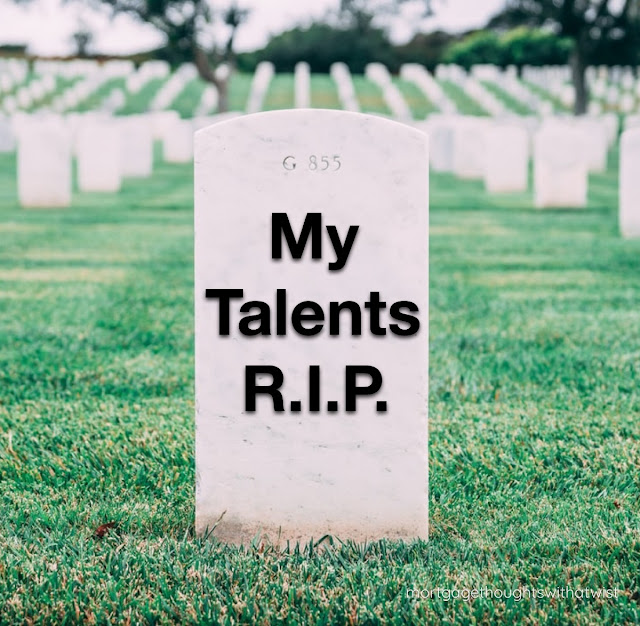 Don’t waste them!
Thank you so much for reading today. I hope that I made you smile and think a little bit. Be sure to check out my Podcast on iTunes, Soundcloud and Stitcher ---- Jen’s 10 G’s