The Story of the Nose Bite and The Prayer

It is hard for me to believe sometimes that I was in an abusive relationship. A bad one. It was a dude that came from a "good family", but he wasn't good. By the time I realized what I had gotten into, it was too late, I was already sucked in and in love and stupid as hell. Love was truly blind. He was horribly verbally abusive to me and then one day it became physical. The fucker bit my nose in a confrontation. A deep bite. They could not stitch my nose because it was a human bite, so I had to walk around with a taped nose, all huge and red for several weeks. My scar is sill visible (to me) despite the multiple times of getting it lasered. Now, it serves as a reminder to me to be careful and to know the red flags that I chose to ignore way back then.

I am a strong woman...very strong. I sometimes shake my head when I think of back then and wonder how I got myself into that mess. It was crazy. It was scary. Now, I use it as a learning tool of the perennial reminder of what NOT to do.

I tell you this because it is a back story on what has become one of the greatest moments in my life.

It is about God talking to me again and me listening.

During that time, my step father was very ill. He had been in and out of the hospital many many times. That man endured so much and he fought so hard. It was a very difficult time for our family. My dad had taken pretty much permanent residence at my house so that he could help my mom.

Marv was one of the best people I know. He was a total smart ass. He loved my mother deeply. He worked hard. He was loyal and all around just a great dude. He used to help me write papers at 2am the day before they were due while I was in college (I just loved this about him) because I would always wait until the last minute. He was just an amazing man.

He and I used to have "God talks" a lot because he SAID that he did not believe in God, but I had figured out that what it really was was that he was mad at God for some reason. He and I would playfully argue back and forth about this quite a bit.

I always told him that if I was wrong, it is not a big deal, but if HE was wrong, then it was...

Fast forward to a Monday morning while he was in the hospital for the 5646346 time. I had a dream where God told me that I had to write a prayer to lead Marv to Him. Oh, and I had to get up right now to do it.

So I did. I woke up super early and wrote the prayer, which I will share with you at the end of this. I sped my ass down to the hospital and got there around 7am and walked into his room and shut the door.

When I walked in, he was surprised to see me. He looked at me because I was smiling and said, "Jen, how are you always so happy? How can you be smiling when THAT just happened to you (taking about my nose)? You and I Jen, we always seem to get the bad breaks...yet you are happy....How?"

My answer was, "My relationship with God. My life with Him in it is so much better than when I was without. He changes you from the inside out."

We talked for a bit and laughed. I will never forget his smile (more like a smirk) as we joked about all of the crazy shit that had happened over the years.

Then I told him about my dream and the prayer and I asked him if he would repeat it after me as I read it to him.

As I write this, I am crying because it was so beautiful and such a very tender moment in my life. the moments are like snapshots in my memory that I hope never go away.

We read the prayer together. We were both balling with tears. We did it.

I stayed a little while longer to visit him and then I went to work that day.


Marv passed away shortly after that.

I thank God often for that dream...for that moment...and I think, "Imagine if I had not listened." 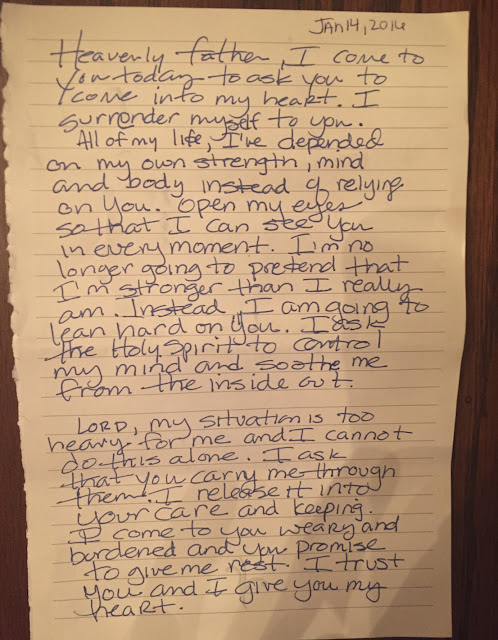