One of the things that I had said in an earlier post was about failing…and the fact that I am not afraid to fail. I would rather try something and fail miserably than not even try at all. I think that it is one of the keys to success, at least for me anyway.

I have made some pretty bold and ballsy moves in my life that I am sure that have caused others to wonder, “ WTF is she thinking?” Some have been great…some I have fallen right on my face. You just gotta pick yourself up afterwards and congratulate yourself for at least trying. Most people won’t even TRY for fear that they won’t excel at something or be as good as they envision or would like to be. That is silly. Take a chance, will ya?

I am sitting here trying to think of some of my “bolder moves” that could have totally sucked…and some ended up being great and some not-so-much.


I could go on…lol. But you get the point. I HAVE failed at a lot of shit, trust me. It takes courage to try things when you know you can fall flat on your face. It’s a blow to your ego when you put it all out there and you don’t get “it” or don’t have the success that you wanted and that is what holds a lot of people back….because you care what others think of you. Well, Fuc* what everyone else thinks, does or says!  I had to learn to get over that. Try shit!  Fail. Get back up again. It’s OK. Try again. Fail. Get back up again. Yup…still ok. Try again. You know the sequence. You will find that some things/people/activities/dreams you thought you had really weren’t right for you, but at least you do actually know!

Just because I have failed so many times doesn’t make me a failure. It makes me vulnerable, courageous and tenacious…and those are f-ing great qualities to have. 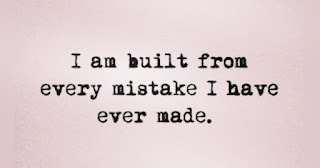